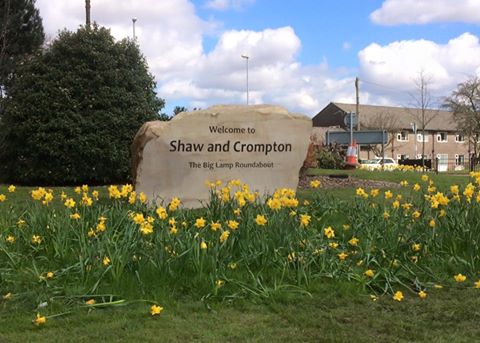 Everything you need to know about Shaw and Crompton....
History, News, interesting facts and so much more!

We would love to hear from you too!
Any additional information you have about this area, funny stories, photographs and your memories of Shaw would be gratefully received and added to the blog.

The murder of Kate Garrity

Of interest in Shaw

John GRIFFITHS aka Jack was a  19 year old young man who was executed by hanging on the 27th February 1906 for the murder by strangling of a 17 year old Shaw girl. His executioner was Henry Pierrepoint

Kate Garrity, who was murdered in Shaw on December 19, 1905, was a 17-year-old who had been given two shillings by her mother and sent out with a jug and a bottle to buy beer and whisky from The Blue Bell pub.
Her route took her past the corner of Greenfield Lane and Moss Hey Street. Her body was found the following day by the father of Jack Griffiths who stabled a pony nearby. She was lying beneath sacking in an entry. Interestingly her body was taken to the Duke of York where she was examined and a post mortem was conducted.
John (aka Jack) Griffiths, Kate’s former boyfriend, was quickly arrested.
They had been dating for a while but Catherine had broke off their relationship after John Griffths had beaten her and also in another incident when he had beat a man who had stopped to talk to her.
He had been seen in a pub in Greenside Lane and
He had left two clear clog imprints where he had jumped from a wall. The clogs belonged to his mother and he’d borrowed them because he couldn’t afford a pair of his own. The right one showed a piece of clog-iron missing and that was the case with his clogs. He had also stood in paint at the scene of the murder and a trail of paint led in the direction of his house
Traces of blood also incriminated him. Kate had put up a struggle
He claimed to have been in the Temperance Hall at the time of the murder.
Throughout his trial John claimed his innocence but was convicted of murder. He continued to claim his innocence and a number of pleas for clemency were made but on the 15th of February John wrote a letter to his mother admitting his guilt and asking forgiveness he was later executed and placed in a paupers “penny coffin” and buried in the murderers cemetery.

The murder was reported widely throughout England and one such report featured in the Western Gazette newspaper Somerset with the below headline:
Murder of a SWEETHEART.— At Manchester Tuesday, John Griffiths was sentenced to death tor the murder Ins ..

The above has been taken from a number of publicly available sources and condensed for the purpose of this article. I cannot confirm complete accuracy and have produced the above for interest of the members of this group
No comments:
Email ThisBlogThis!Share to TwitterShare to FacebookShare to Pinterest
Labels: History

No comments:
Email ThisBlogThis!Share to TwitterShare to FacebookShare to Pinterest
Labels: Community spirit

No comments:
Email ThisBlogThis!Share to TwitterShare to FacebookShare to Pinterest
Labels: Animals

A tank was given to Shaw